On March 31, 2009, Sergey Strygin (Russia’s leading Katyn-expert) turned to a licensed forensic expert, Eduard Petrovich Molokov with a request to analyse “Beria’s letter nr. 794/B” of “March __, 1940” in order to determine whether it was written on one or several typewriters.

Molokov has an expert diploma (issued in 1973 by the MVD, i.e. the Ministry of Interior of the USSR) and is entitled to conduct such investigations. He used a “MBS-10” microscope, which allows up to 32 times magnification, when analyzing the document. During the analysis of the “Beria letter” (which consists of four pages) he magnified the text 3 times and carefully compared the images.

Molokov found that pages 1, 2 and 3 are written on a different typewriter than page 4. He has, among other things, examined the letters’ distance from each other, their altitudinal and the clarity of the printing ink. His conclusion is that the pages 1, 2 and 3 are consistently equal. But page 4 (the one with Beria’s signature on) differs from the first three pages.

It should be added that the typewriter which was used to print page 4 has a font that is known to have been on one of the typewriters in Beria’s office, while the font from the typewriter that wrote pages 1-3 is unknown (it has not been found in any of the documents sent by Beria).

There is one other important detail. Molokov had only access to high definition digital colour copies that Strygin was allowed to do in the Russian archives some years ago. This means that Molokov did not have access to the physical letter, which in its turn means that such things as the age of the paper have not been possible to examine.

More information on Molokov’s analysis of the “Beria letter” can be found here: 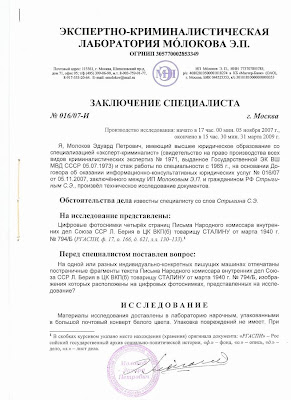 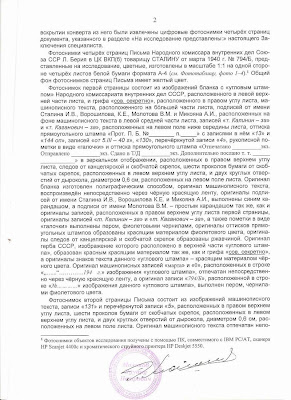 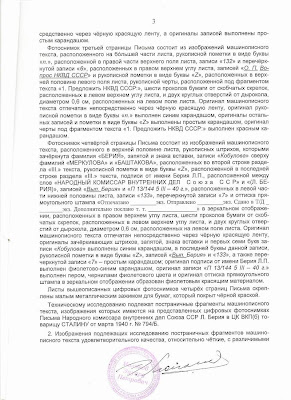 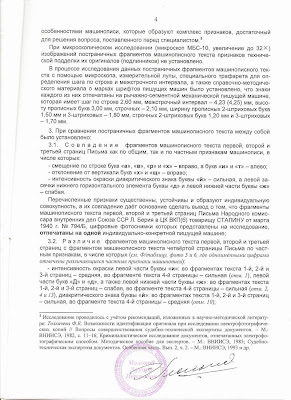 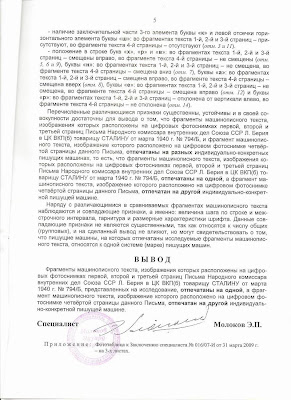